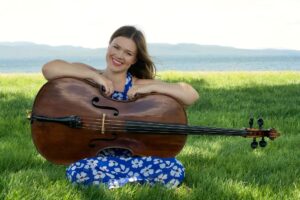 Adella Hotchkiss is an emerging string educator and cellist. She is currently a Teaching Assistant to cellist Paul York at the University of Louisville School of Music, where she is working on her second master’s degree in String Pedagogy. At UofL, she plays in the Graduate String Quartet and holds the position of principal cello with the UofL Symphony Orchestra, Sinfonietta, and UofL Opera. She also participates in UofL’s Historical Instruments Ensemble and New Music Ensemble. Festival appearances include Sewanee Summer Music Festival (Cello Fellow 2017), Eastern Music Festival (Fellowship Program 2019), and New Music on the Point.

In her undergraduate career, she was a dual winner of the University of Nebraska 2015-2016 concerto competition. While studying at UNL, she taught with the UNL/LPS String project for two years. Ms. Hotchkiss currently teaches secondary cello lessons, coaches chamber music groups, and assists with the string methods courses for BME students as part of her assistantship at the University of Louisville.