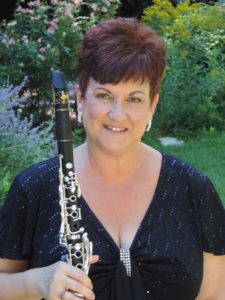 Diane Barger is Hixson-Lied Professor of Clarinet and member of the Moran Woodwind Quintet at the University of Nebraska-Lincoln where she received the 2013 Annis Chaikin Sorensen Award for Excellence in Teaching in the Humanities. She is principal clarinet of Lincoln’s Symphony Orchestra, International Clarinet Association (ICA) Pedagogy Chair (2016-2018), Nebraska State Chair (2010-present), Past Artistic Director of ICA’s ClarinetFest® 2012, ICA Past-Treasurer (2000-2010), Nebraska Chair of the National Association of College Wind and Percussion Instructors, and is an Artist/Clinician for Buffet Crampon, D’Addario Woodwinds, and Silverstein Works. In addition to her work as a collegiate educator, Barger actively works with pre-college clarinetists and is involved in mentoring her cadre of clarinet instructors at Cornerstone Academy of Clarinet, LLC where she serves as Founder and Professor of Clarinet.

Barger is an active soloist and chamber musician, master class clinician, and adjudicator throughout the United States and abroad. Her appearances include the 2017 (Florida), 2016 (Kansas), 2014 (Louisiana), 2013 (Assisi, Italy), 2012 (Nebraska), 2011 (California), 2010 (Texas), 2009 (Portugal), 2008 (Missouri), 2007 (Canada), 2006 (Georgia), 2005 (Tokyo), 2004 (Washington, D.C.), 2000 (Oklahoma), and 1997 (Texas) International Clarinet Association annual ClarinetFests® and the 2014, 2009, 2002, and 1998 Oklahoma Clarinet Symposiums in Norman, Oklahoma. She was the guest artist for the 2013, 2007, and 2004 Alabama Clarinet Symposium in Birmingham, the 2001 Southern Appalachian Clarinet Retreat in North Carolina, and appeared as soloist with the Northern Arizona University in the spring of 2009 and with the Florida State University in the fall of 2002. A specialist in the genre of operatic fantasies for clarinet based on Vincenzo Bellini operas, Barger can be heard as a featured soloist on the International Clarinet Association’s 1998 Recording Project compact disc in a performance of Domenico Mirco’s “La Sonnambula” Fantasia for clarinet and piano. In August 2012, Barger published a CD of works by Scott McAllister entitled BlingBling, as well as 13 editions of Bellini operatic fantasies by various 19th-Century composers, all of which are available through Potenza Music. A new CD by the 402 Trio (with Mark Clinton, piano and Jeff McCray, bassoon) entitled “Conversation Between Friends: Music by William Hurlstone and Bill Douglas” is also available through Potenza Music (released in summer 2017).

Barger received the Doctor of Music (1999) and Bachelor of Music (1988) degrees from the Florida State University where she was a student of Frank Kowalsky. While completing the Graduate Certificate in Performance (1990) and Master of Music (1989) degrees from Northwestern University she was a student of Robert Marcellus. For her doctoral research she was the recipient of the 1996 Faculty Summer Research Fellowship and Grant-in-Aid awarded by the University of Nebraska-Lincoln Research Council. She also received the 2001 Hixson-Lied College of Fine and Performing Arts Distinguished College Teaching Award and numerous teaching awards by the UNL Parents Association and Teaching Council. In addition to being a member of the International Clarinet Association, the Music Educators National Conference, the Music Teachers National Association, and Sigma Alpha Iota, Barger served as Coordinator of the ICA’s High School Solo Competition (2003-2005) and is Chair of the Wind Area at the University of Nebraska-Lincoln.