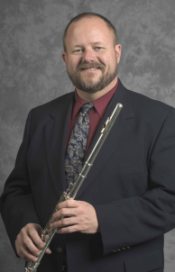 John Bailey is Larson Professor of Flute and a member of the Moran Woodwind Quintet at the University of Nebraska-Lincoln School of Music. He is principal flutist with Lincoln’s Symphony Orchestra, with which he has appeared as concerto soloist on numerous occasions. He received his undergraduate degree from Indiana University, where he studied with James Pellerite. Both his masters and doctorate were earned at Northwestern University, where he was assistant to Walfrid Kujala. He also studied at the Hochschule für Musik und darstellende Kunst in Vienna, Austria, with Louis Rivière, piccoloist of the Vienna Philharmonic. From 1982 to 1996, he was program annotator for the American Institute of Musical Studies (AIMS) in Graz, Austria, where he was also co-principal flutist with the festival’s orchestra.

He has been principal flutist with the Illinois Philharmonic, Opera Illinois, the Illinois Chamber Symphony and the Civic Orchestra of Chicago. He has performed at the Phillips Collection, Washington, D.C.; the Chicago Public Library Cultural Center; Unity Temple, Oak Park, IL; numerous universities throughout the US; and in recital in Germany, Italy, and England. With the Moran Woodwind Quintet he has toured throughout the Midwest and released a series of recordings on the Crystal label–“The Wind Chamber Music of Theodor Blumer,” Vols. 1-3.  The third, released in December 2007, contains one final quintet and three works for flute and piano.  His recording of “American Masterworks” on the Centaur label (works by Ran, Larsen, La Montaine, Persichetti, Snyder and Heiden) is forthcoming.  He has conducted the International Flute Orchestra (35 professional flutists and teachers) on tour in Poland, Chile, Greece, China, Spain, Austria, Germany, the Czech Republic, Slovenia, Hungary, Slovakia, the Baltics, and Russia. He was President of the National Flute Association 2003-2004 and program chair for the Washington, D.C. convention in 2002.